7 Keys to Writing for Webcomics

Do you want to write a good webcomic or are you having trouble writing your strip? Writing in and of itself is obviously a massive topic, but I think I can help you write a good webcomic by giving you 7 basic steps by which to live. Most any webcomic genre can benefit from these easy to follow guidelines. If you write a gag-a-day strip/panel or an editorial piece, then the first two steps may not apply as much, but the rest will. So let’s get down to business.

1. Come up with a cast of characters that can work off of each other

When starting a webcomic, it’s real tempting to dive in with the first character or idea that you have and begin drawing and writing. But hold on there speedy! If you want some longevity in your strip, you are going to want to think about how these characters interact. What you really want is a cast of characters that can play off each other’s strengths and weaknesses.

When I say “cast” I don’t mean you need a large number. Some of the most successful strips have had very few main characters. Calvin and Hobbes was really all about Calvin and his toy tiger, Hobbes. While there are other characters there, their job is to support the main characters.

In Marooned, the main characters are Captain John, Asimov the robot and Ugo the Martian. There are other characters in the strip, but they support what is going on with the big guys.

So think about who the main players are going to be in your strip, and then think about how they can interact to create interesting, funny or dramatic situations. If you have a hard time coming up with those situations then you need to do more thinking about who these characters are and what they mean to each other.

2. Sit down and write your “character bible”

Once you have a handle on your cast, you need to create what is known as a “character bible.” This is a living document that really only you will ever see. It’s a reference tool for you to help you remember what your character motivations are, what their conflicts are and some bits and pieces about who they are, where they’ve been and where they want to go.

There’s really no one way to build up a reference like this. For Marooned, I have a Google document that I use that is sectioned off by character. (And a “character” can be many things, for example the New Frontier Federation is a “character” in my strip). I have lots of information about who Captain John, Asimov and Ugo are along with pieces about who the lesser players are as well. There’s detail in there that lets me think about who these people are deep down. Stuff that will never see a strip, but that helps point me in the right direction.

Anything and everything is game for this reference. If you think it will help you, put it in there – remember it’s just for you. But there are two key items that should be in there about at least every main character: motivation and conflict. You really want to know what motivates your character and what conflicts they face in their life, because these things greatly shape how they will act. This is true in real life as well, just think about those things regarding yourself.

For Captain John, his motivations revolve around his insecurity and desire for praise and acceptance. His conflicts are both internal and external. He struggles with his hard outer shell which he uses as a protection against failure. He also is very conflicted about working with an AI robot. When you know these types of things you are better equipped to know how your character will act and more specifically, what they might even say in a given situation.

Keep this document living and evolving and it will constantly help you write.

3. Be thinking about your strip and always be ready to capture ideas

Hopefully you are doing a webcomic because you love the art form. Therefore you should be thinking about your strip at least a couple times a day (especially if you are keeping an on-time posting schedule!) Unfortunately, there are very few web cartoonists who do this for a living, so you need a way to capture ideas when they hit you – because if you don’t, you will forget them!

It’s easy enough to carry around a small notebook and a pen or pencil, even if you work outside or away from a desk you can keep it in your car, locker or whatever. The key is to have a place to write down something when inspiration strikes so you don’t lose it.

For me, once again I keep a Google document called “strip ideas” that I cut and paste into. Because I work at a desk I always have access to it. However, I also bring my sketchbook to work, so if I want to sketch it out I can do that too.

Don’t forget night time as well. I’ve had a few ideas in the middle of the night where I had to get up and set them down. It’s best to have something by your bed to record an idea because it’s real easy to fall asleep before you do – and then forget what it was!

4. “Sketch” out your dialog

This may seem odd since we are talking writing, but you have to remember that webcomics are a visual art form. Once I have my strip idea, I sit down and write out the dialog for each panel across the top of the page. Here’s what that looks like (along with some sketches): 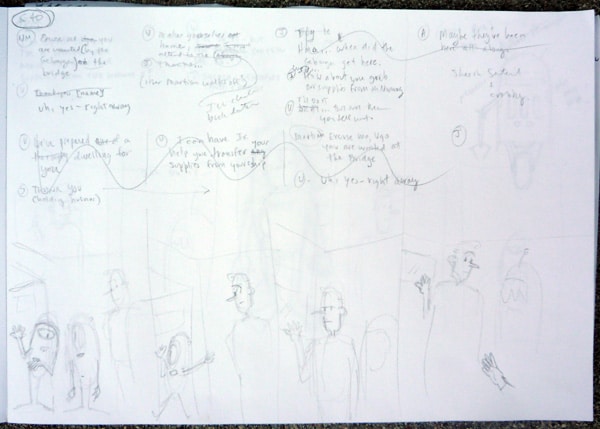 The idea is to begin visually laying out the dialog. Your dialog is just as much a visual element of your strip as anything else. Words form shapes and word balloons and groups form shapes that subtlely affect the reader. Plus, you want to fit things in properly. Nearly every time I do this I immediately find some issue that needs changing or something I can add or take away. This is also a good idea to get a handle on if you have too much or too little text.

When you have your dialog sketched/written out, it’s time to examine your words. Words are everything! Words are wonderful! Don’t be content just to write “see Dick run” when you could write “Dick sprinted to Jane with gusto!” Cheesy example but you get the point. Think about how your characters talk, too. Do they have a fondness for a certain type of speech or certain words? Maybe your character just would not say that particular word, or you can think of a better word for them (this is where the character bible comes in handy).

Don’t be afraid to try new words or even – gasp – use a dictionary or thesaurus! While you don’t need to go overboard in this regard, simply going over your words and seeing how you can add some spice, humor, character or style to your dialog can really help polish your writing.

Once you are satisfied with the words, it’s time to prune them down. Seem counter-productive? It’s not. In the step previous you were looking for the right type of words. Now you are looking to pare the dialog down to its essence – the very center of the point for each sentence.

This is of primary importance in a comic strip, and especially those dealing with humor. Extra words, or wordy sentences (or heaven forbid run-on sentences!) make for tedious and murky reading for your reader. What you want is snappy, tight writing.

In one of my strips, Ugo is telling Captain John that hey have a place for them to stay. My sketched out dialog was this:

“We can set you and Asimov up in one of the empty dwellings.”

Ugh! That’s awful wordy and clunky. So I cut it to:

“We’ve prepared a dwelling place for you here.”

During the thumbnail sketching, I realized I could just have Ugo pointing to the house, so it finally became:

“We’ve prepared this dwelling for you.”

I was able to chop it down from 13 words to 6 and get my point across much more succinctly. Remember you aren’t writing prose, this isn’t a novel. The visual aspect of a webcomic is just as important (some would say more, some might say less) than the words. Regardless of how you feel about that, tight polished writing will flow better and read better for your readers.

There may be times when you want to say a lot – possibly a bit of exposition or a flashback. Even during those types of panels, you should strive to keep the paragraphs polished and tight. My wife is a writer and just finished a 120 page screenplay. She went over and over this script time and again to “cut the fat” out of each and every sentence. That’s a whole screenplay – we’re talking about one comic strip! So remember to “cut the fat” out of your words.

By this point, you have seen too much. Hand it over to someone who has not seen it yet and ask them to look for errors. Because if you don’t, you will post mistakes and you will feel like a dufus. If that person is someone you trust you could ask for suggestions at that point on the writing, but that is up to you. I am lucky in that my wife is a seasoned professional writer – and her nickname is “eagle eye” on top of it – so she catches my mistakes.

There have been times when I have forgotten to have her read a strip, and guess what? Yep, mistakes go up on the web site. You don’t need a professional to do this for you, just get at least one pair of eyes other than your own to take a look.

Follow these seven steps and writing your strip should become a joy instead of a chore, and that’s the idea right?