One of the coolest things about being a cartoonist is meeting other artists. In the two plus years I’ve been doing this, I’ve met lots of really neat people. As many of you know, I’ve even met one of my best friends, Steve Ogden, by commiserating over comics.

I mentioned yesterday I had another pair of eyes on my comic. That pair of eyes just happens to belong to Christopher Baldwin. I had no idea about Chris or his comics until last week, but suddenly I find all these great comics he has produced! I wrote to him to compliment him on his comics and see if he had any advice for me (I’m a sucker for good advice) and we ended having a really nice conversation and he was very helpful.

Who is Christopher Baldwin? Well, he’s currently a cartoonist for MAD magazine (how fun is that?!) and has already found great success with his comics on the web. He’s been covered in The Washington Post, Wired Magazine, Salon Magazine, UK Daily Telegraph, Newsbytes, and even appeared on NPR. He has been best known for two long successful runs of webcomics, Bruno, which ran from 96′ to ‘07 and is about an introspective young woman, and Little Dee a wonderfully charming comic about a young girl who gets lost in the woods. (More about Dee in a bit.)

However his current project is a sci-fi comic! Yeah, let’s talk about Spacetrawler!

(Note: this is an adult comic with language and adult themes – consider it rated R.) 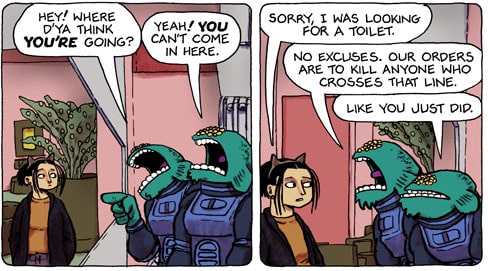 I’m not sure how I missed this one. Maybe because it only started up this year. But Spacetrawler is really very cool. Let’s talk about the art first. As you can see, it’s colorful, detailed and excellently drawn. When you see his full pages, you can’t believe the amount of detail that goes into an update twice a week (on top of all his other work!) I mean these updates are BIG.

And his depictions of the many alien races that inhabit his story are just fantastic. All different variations of well designed and drawn characters. Imaginative and interesting. 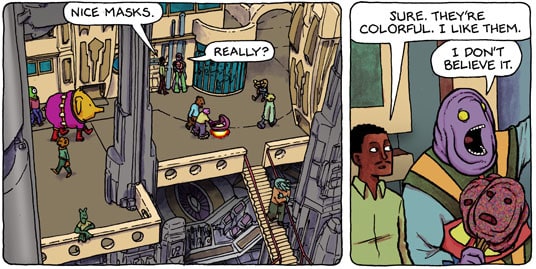 And this brings me to the writing. Chris states that he spent a year in development and it shows. He has a well thought out story (one he says will keep him busy for TEN years!) and well rounded characters. It’s a fairly large cast already and he has just begun. But already we understand the motives and the personalities of all the main characters. This makes it really fun to read.

And make no mistake – read you will! This is a STORY for crying out loud! I love the fact that he makes no bones about plenty of prose to go along with that great art. We’re getting lots of bang every update. Not to mention, the comedy is excellent. Chris is funny in ways I wish Marooned was. And I found myself really enjoying the strip, and literally laughing out loud at certain points.

The story revolves around an alien race, the Eebs, that has been put upon by the rest of the universe due to the Eebs special talents. This is quite unfair of course. After a rousing introduction where we see Rickshaw Boans (founder of Interplanet Amity) free a crew of Eebs and disappear, we are introduced to Nogg, interplanetary activist and shipâs captain. Turns out he is responsible for the kidnapping of various people on Earth. He hopes these Earthlings will claim Earth’s position in the G.O.B. He hopes by doing this that eventually he can free the Eebs from their slavery! 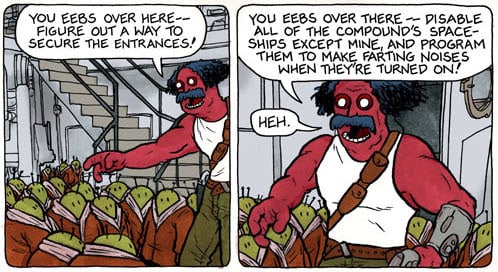 Trust me, this is just scratching the surface.

To find out what the G.O.B is, who the Earthlings are and how cool Nogg is, you’ll just need to start reading Spacetrawler from the start. And now is a great time. Since it only just started in January with a twice a week schedule, catching up is very easy. Trust me, you won’t regret it.

Again, note this should be considered reading for 18 years of age and older. So for my younger readers, please skip this one for now.

Everyone else, get over there!

That brings us to Little Dee. 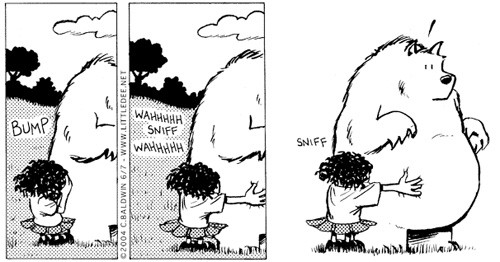 Little Dee apparently already completed its run, but has once again begun from the beginning. This time the art is larger and it is being posted Monday-Saturdays with annotations.

When I began reading this one, I was immediately taken once again by the beautiful art and the great characters. It seems simple on the surface. A little girl wanders into the forest and meets up with a bear – Ted – who takes her in. His vulture friend (Vachel) thinks it’s a bad idea. But they along with a dog named Blake realize it’s up to them to take care of her.

I got this far and realized I really wanted this in book form – so I ran over and bought book one! This strip has the classic look, and seems to have wonderful writing. I really can’t wait to sit down and read it. Meanwhile, you can check it out at the Little Dee site. This comic should be safe for all ages.

Many thanks to Chris for taking the time to give me an honest critique and help me out (which is always very welcome and appreciated.)