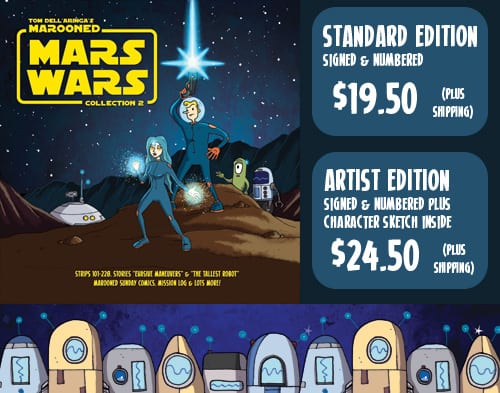 Pre-Order is open from November 17th (today) until November 30th.

This year the book is big… which means heavy… and I really didn’t think about what that would mean. Domestically, you’ll pay $7.50 for priority mail – which is a flat rate I’m using for everyone. Some will pay a bit more, some less. I hope this is okay, but it’s the best I can do with PayPal.

Internationally, the shipping is nuts. It’s going to be $17.75 to ship outside the U.S. I wish I could reduce that, but I can’t. I will offer a free character sketch for any Int’l orders. Not much else I can do.

Domestically, if you’d like to have it sent Media Mail, I can do that. Use the contact form to make that request, and I will send you a PayPal money request. In that case, the shipping is $2.75. Otherwise, use the links below.

Paperback: 172 pages
Dimensions: 9 x 9 inches
Standard Edition
Signed and Numbered
Artist Edition
Includes Character Sketch, also Signed and Numbered
Quantities WILL be limited! – Preorder will be available and will be the only way you can guarantee yourself a copy.
40 PAGES of bonus content that will not be available online – ever!

Covering Episodes 4 (“The Listener”) through 8 (“Brains from Another Planet”), the story picks up with John having just met the Dark Ones and still deathly ill. We finally meet Captain Lian Fisher – a big surprise to John – who is now known as “The Listener.” There’s a battle with the Krosa. Lian comes to terms with her role on Mars and we get a visit from Zed of the Baro. And of course we meet a Gooble, too! And that’s just the tip of the iceberg!

For this book, I went back through the drawings of Lian and tightened them up, and in many cases simply redrew them. When first drew those strips with her, I hadn’t really drawn any women in quite some time. Those drawings really needed freshening up.

How was it that John and Asimov met? Now you can find out! John Floyd is a down and out Moon Runner looking for a new gig to pay his debts. Asimov is a highly experimental (and temperamental) robot. Sounds like a perfect match! Nanoganics Robotics puts them together to see what happens. You can only find out in Mars Wars!

This charming story chronicles a lonely, tall robot who is looking for friendship but finds only fear. Is he all alone in the world? Is he the only one who feels this way? Originally created for the SPACE show, it hasn’t been printed anywhere else – until now!

A group of wonderfully talented artists has again answered my call to ply their skills in the Marooned universe. Below is a full list of these super folks. Each artist has contributed either an illustration (or more than one) or a “Marooned Sunday Comic” – a one or two page short story featuring Marooned characters. As you can see by the work they produce, it all came out fantastic and you won’t want to miss it!

The list below gives the artist name and his contribution to the book in parenthesis:

The full page comic “Click Click” – a little look into John and Asimov’s trip to Mars. Was previewed on the site, but no only available in the book! Also “Pingo’s People,” a painting by the famous Martian author, Pingo, with commentary.

Like last year, I’ve included a few pages of development artwork with some notes on my process of creating the Marooned universe. Exclusive to the book!