Hello and welcome to Marooned, a longform humor and adventure comic about Captain John and his robot sidekick Asimov who get stuck on Mars. The following strips introduce you to the story and the characters. 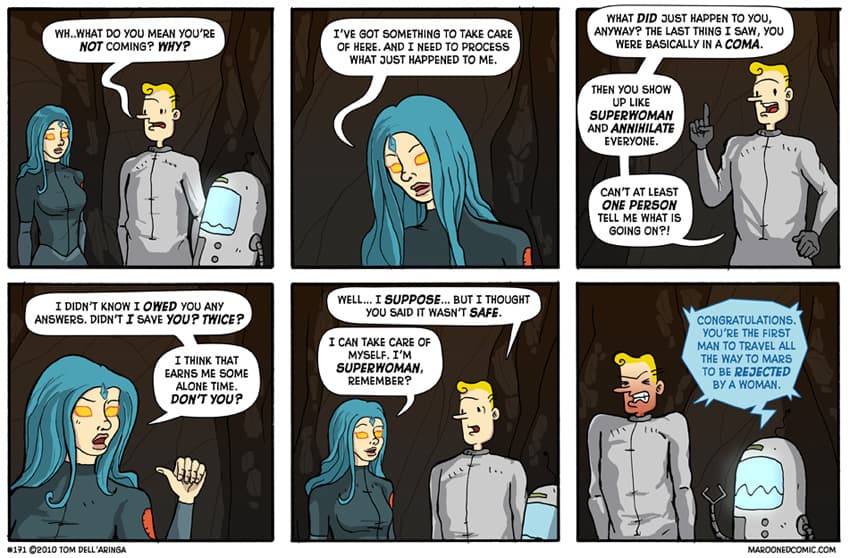 Above: John and Asimov are not alone on Mars. In fact, John was not the first human to land on Mars. Captain Lian Fisher arrived before him – and she has undergone some changes (that’s her with the blue hair!) Asimov likes to take John down a notch or two whenever he can.

Above: John was befriended by the local Martians. Ugo is the green fellow, and appears to be some kind of leader – and quite friendly. And this is John’s introduction to the young orphan girl, Ril – the little lady in pink.

Above: After a conflict with Bob, the crazy robot, John and Asimov have some personal time. I guess Asimov isn’t the sentimental type. 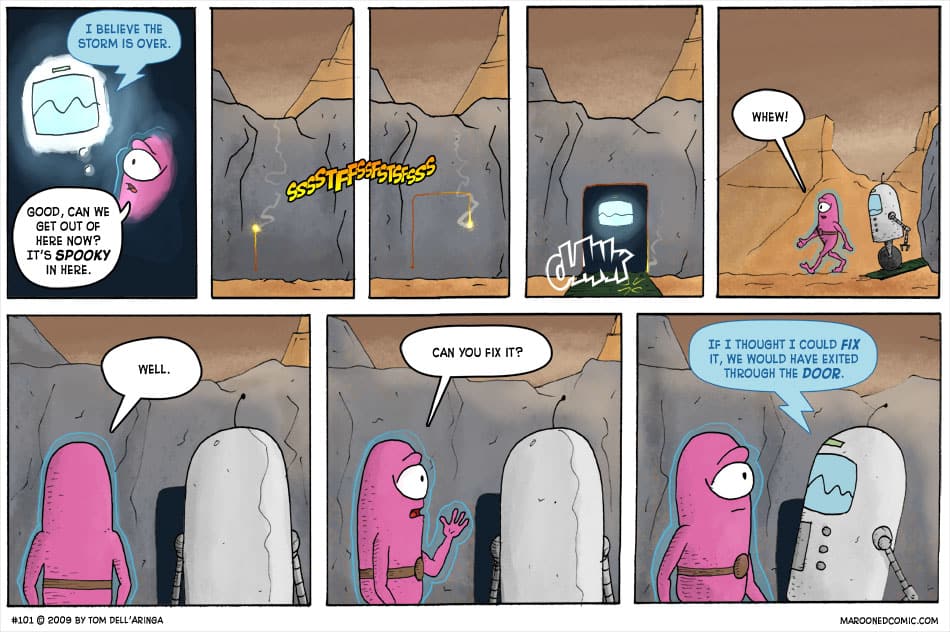 Above: Eventually John and Asimov look into how they got stranded on Mars – it seems it might have been intentional. Asimov and Ril had to cut their way out of the Destiny II (John’s ship) after a sandstorm nearly destroyed them. 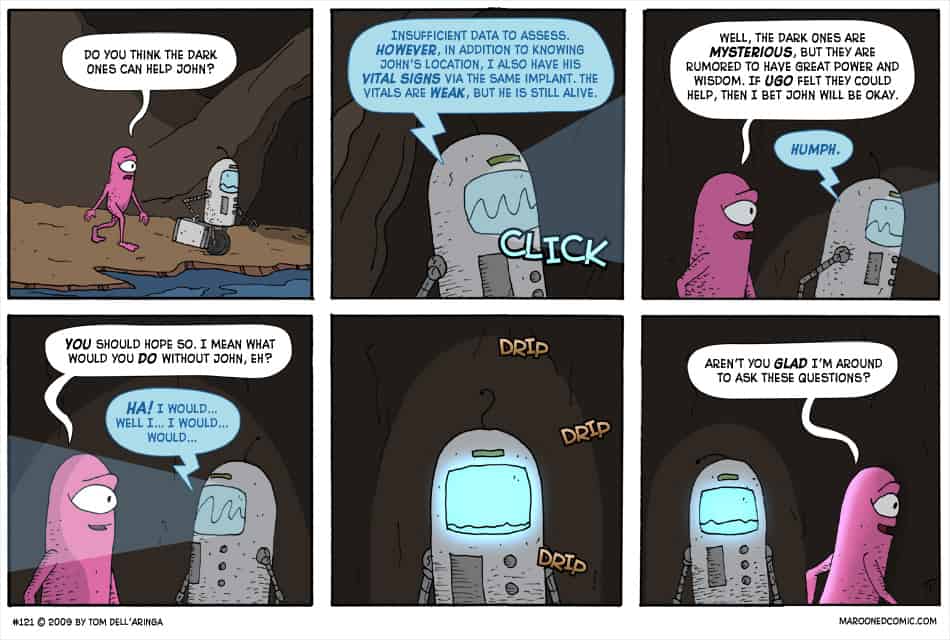 Above: Asimov and Ril were alone at the ship because John had become very sick. Ugo was taking him to some other Martians called “The Dark Ones” in hopes of getting help. Meanwhile, Ril convinced Asimov to go and try and find John. 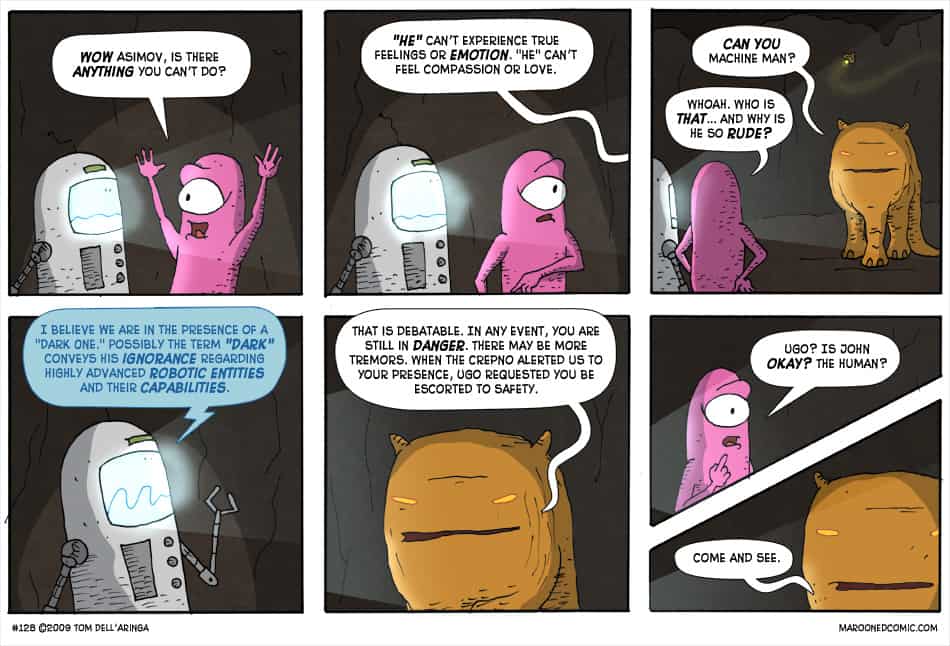 Above: They are able to find The Dark Ones (also called the Volotrum), where it turns out John did get some help. This fellow doesn’t seem all that friendly, does he? 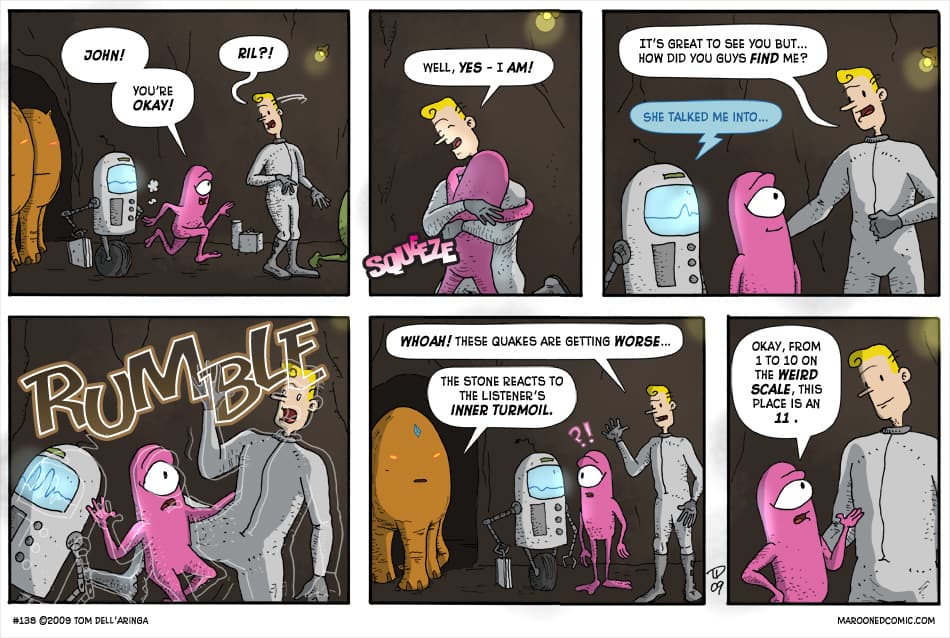 Above: The Dark Ones bring them to John, who has been healed by Lian Fisher who is now called The Listener. She has a strange gem embedded in her forehead and eyes like the Dark Ones. 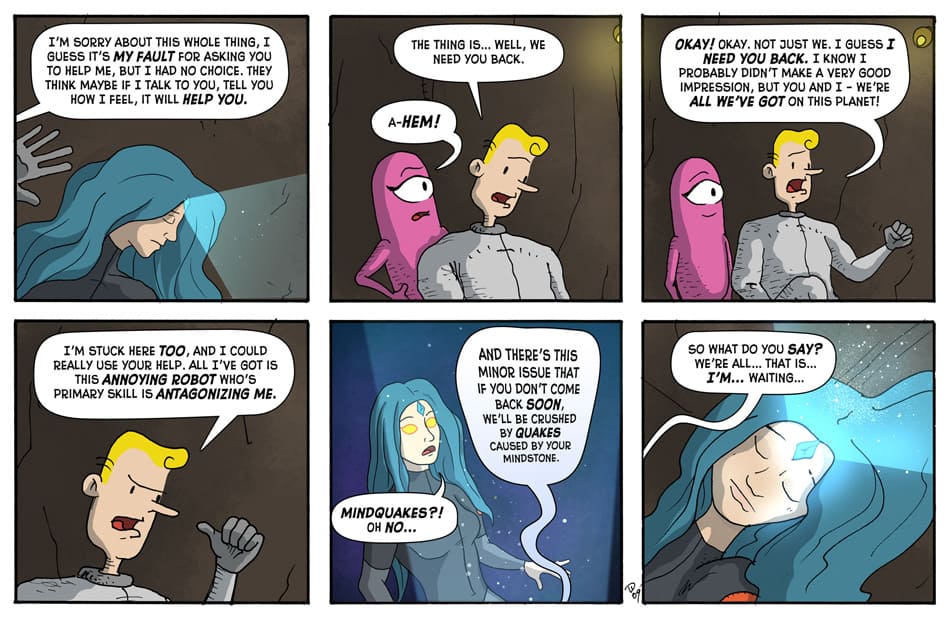 Above: In healing John, Lian fell into a coma. John appeals to her to help her find her way back from her dilemma. Important because her sickness is causing “mindquakes” in the tunnels which could kill them all. 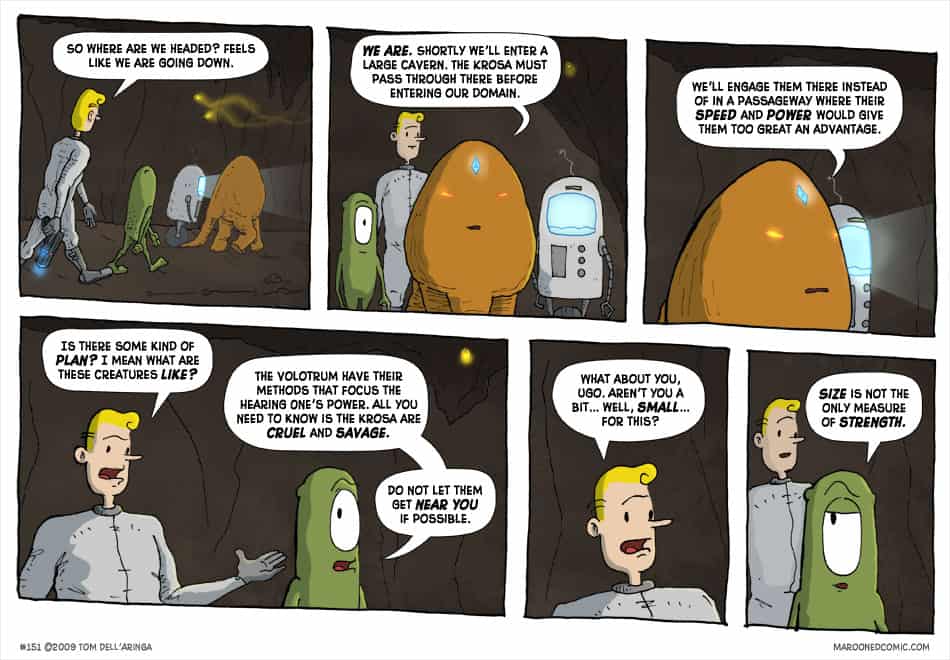 Above: John’s appeal doesn’t work, and the mindquakes have drawn unwanted attention. They must now all confront the threat of the Krosa, some sort of dangerous enemy of the Dark Ones. 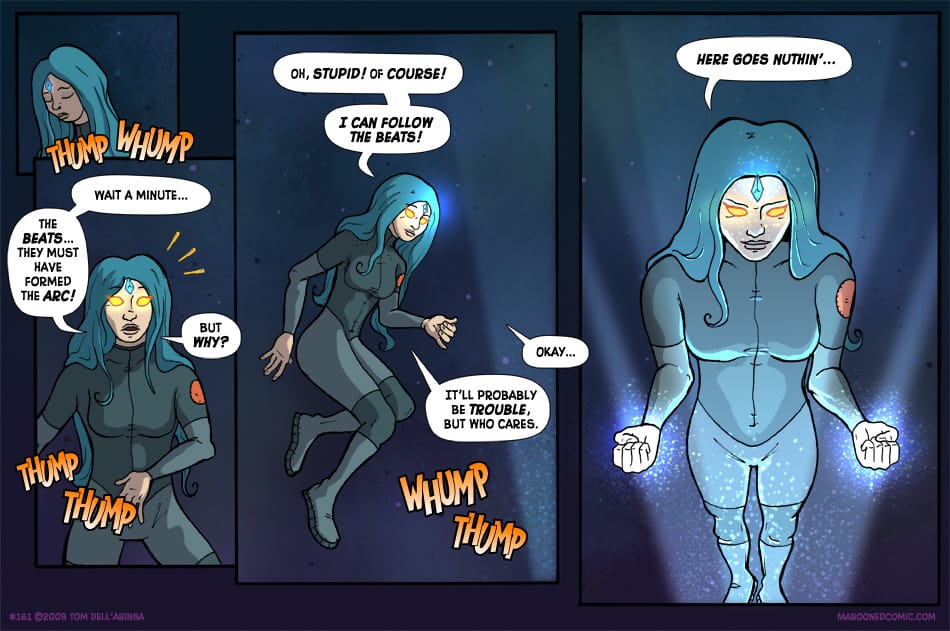 Above: Meanwhile, Lian makes peace with herself and her condition, and is able to respond to John’s plea by following “the beats” – a sort of dance the Dark Ones do to amplify the power of the mindstones. 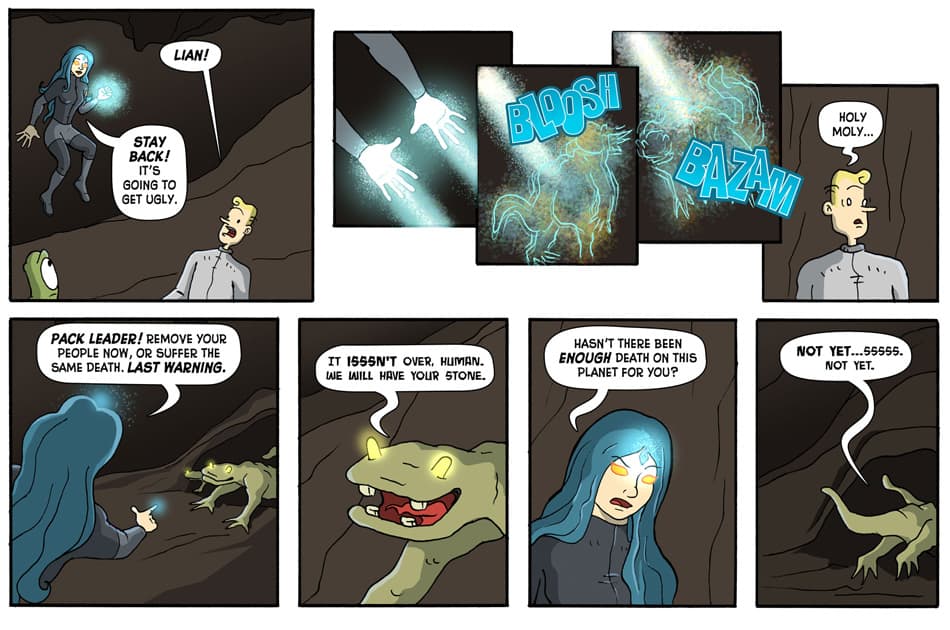 Above: Lian returns, and is vastly more powerful that she was before. She dispatches the Krosa, who vow to return. 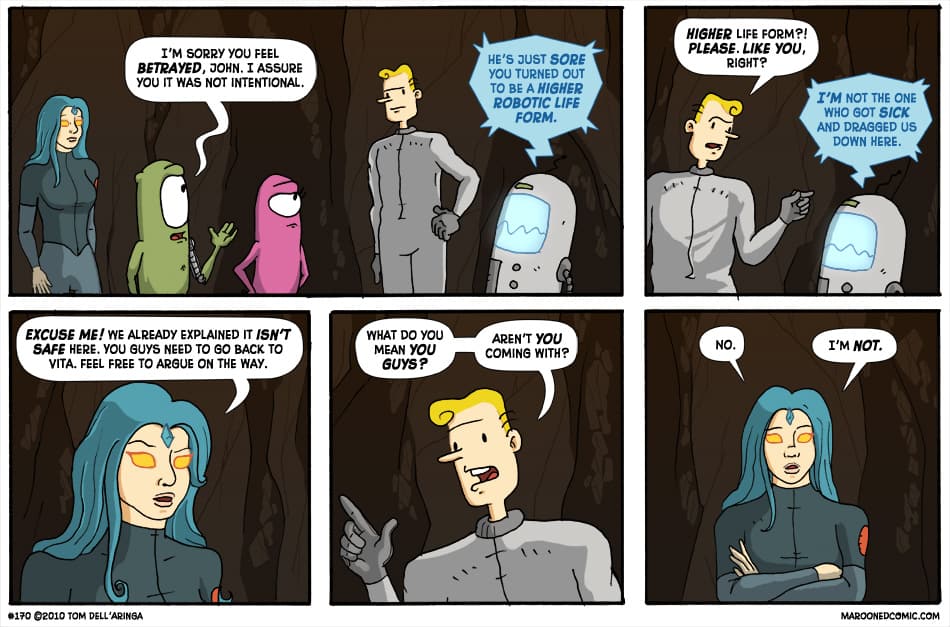 Above: John assumed they would now all return back in safety to Ugo’s underground city, but Lian informs him that she will not be coming with him.

Want to find out more?